Models for Unity Between Scholarship and Grassroots Activism, written by Assata Zerai, emphasizes the value of synchronizing scholarship and grassroots activism, known in academia as scholar-activism. Zerai notes that the value of the tradition of sociology is that it permits marginalized/oppressed scholars to utilize their unique perspectives of humans in society to understand, create, and exercise models for social change. Thus, the theory of scholar-activism is yet another effective tool African-American intellectuals can use to strategize social change in Black America. Additionally, and perhaps most importantly, Zerai details the true function of institutions of education, the perils that come along with using academia as a conduit for social change, and the common responsibilities of scholar-activists.

The intellectual runs rampant in the U.S. society. Moving papers here and there, presenting this and that, reading this, paraphrasing that, thinking critically here, thinking outside-the-box there…but Qui bono? Or in other words, who benefits? Zerai states:

So, what can the African-American do if the popular educational institutions of the United States advocate the digestion and regurgitation of knowledge on behalf of capitalism rather than the excessive, intense exercise of service to humanity? On this note, capitalism itself is not presented by the text as the opponent that the intellectual should be fighting in the pursuit of creating social change. Rather it is suggested that the intellectual should be fighting the habit of digesting and regurgitating knowledge on the behalf of the dominant culture in the U.S.and being sacrificing oneself in the service of humanity as an element of scholarship.  Therefore, scholar-activism is one way that the intellectual can analyze models of social change, create new models for social change, and exercise social change and remain active in Black America and academia simultaneously. This is the major strength of the essay because it illustrates a comprehensive “why” for scholar activism.

Another strength of Models for Unity Between Scholarship and Grassroots Activism is its vivid contextualization of the context and personal experience of scholar-activism. As a student, imagining a profession that idles between academia,  disciplinary fieldwork, and service to humanity seem elusive and far-fetched; however, it is practiced by many African-American intellectuals across the nation. Although, as the text notes, it is important to understand the personal experiences of scholar activists, such as the tension and constraints that arise from consistently laboring between dynamic and isolating spaces as well as the context of Black America and Academic for the intellectual. For example, I found these four challenges of scholar-activists particularly important because understanding and studying them could make one’s scholar activism more resilient and sustainable:

(3) mobilizing and organizing populations who have been forced through an educational system that creates lifelong shame complexes and trauma,

(4) restoring a culture of “Resolute Struggle” into America and saving culture internationally from oppression.

Zerai’s text, Models for Unity Between Scholarship and Grassroots Activism,  probably was written to speak to a diverse audience; however, I find it particularly valuable for undergraduate students questioning the notion that one cannot work professionally academia and pursue transformative social change. As a female African-American, it helps me see how myself and others who share my identity can study the sociological limitations to our progress as a social group while using our disciplinary knowledge to consult grassroots organizations working to obliterate those same limitations.

Three Major Contributions of a Scholar-Activist:

As a student interested in different ways to practice activism in addition to the theory, the survey from Models for Unity Between Scholarship and Grassroots Activism sharing how scholar-activists balance scholarship and activism is very valuable for thinking about my future as an African-American female intellectual! 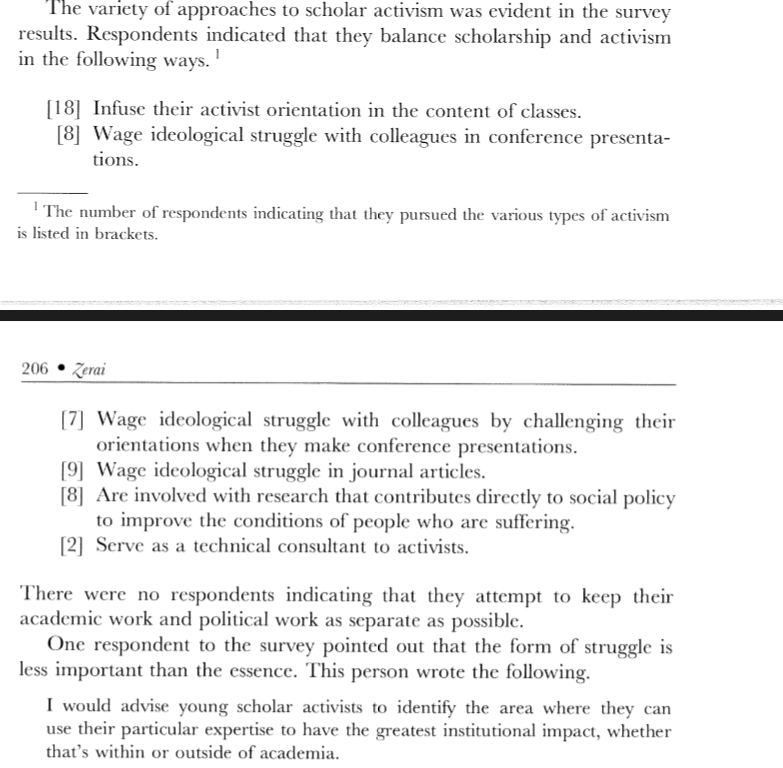